Where were you born?
Chicago, Illinois

What schools did you attend? What was your course of study?
• Northwestern University, Evanston, IL with BSE (Bachelor of Science in Education) in Mathematics
• DePaul University, Chicago, IL  with MS in Curriculum Development

Are you a published author?  Yes

From where are these materials available?
• Mollie’s War is available on amazon.com, bn.com and from McFarland Publishers.
• Math textbooks are available from the publisher.

Please tell about your first publication.
“Mollie’s War” is a memoir that takes you on the romantic and always frightful journey of a WAC (Women’s Army Corps) during the height of WWII who followed the troops into England, France and finally Germany with the Army of Occupation.

It details Mollie’s experiences assigned to the Medical Intelligence division of the U.S. Army.  She was stationed in London, England before D-Day and during the German buzz bombs attacks after D-Day. She was then transferred to Normandy and Paris, France after its liberation and, because of her high school French, was able to act as an informal French translator in social and work–related situations. Finally she was transferred to Frankfurt, Germany as part of the Army of Occupation and witnessed first-hand the devastation of the country.

This book, based on the letters that Mollie sent home, vividly depicts her experiences from her first train trip to Daytona Beach, Florida for basic training in October 1943 to the dramatic picture of seeing the Statue of Liberty as her ship approached the shores of the USA in November 1945. 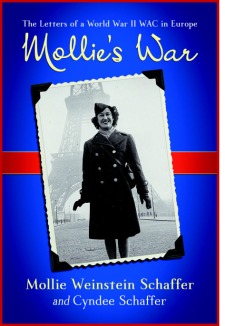 Please tell about the most memorable moments in your writing career.
Collaborating with my mother on this project was a very strange experience.

It is impossible to know what your parents were like before they married and became parents, but using my mother’s actual letters and photos felt like being transported by time machine to another era.  Reading and seeing my mother as a young carefree woman who made decisions for herself and traveled the world during this most treacherous time made me realize the full life that she had before she had a family.

My mother was so excited that we were actually working on the book and writing her story because she always wanted people to know about the role that women played in the military in WWII. Using the actual wording from my mother’s letters made “Mollie’s War” a first person account of World War II in Europe.

Seeing the smile on my mother’s face when she held her book, “Mollie’s War,” in her hand was priceless.  Peppered throughout her letters was the fact that she wanted to write a book … and it happened—only 65 years later!

What path did your life take culminated with your book?
My work experience has taken me into three divergent careers.

First, I worked as a high school  mathematics teacher in the inner city of Chicago. I co-wrote and edited mathematics textbooks for several publishing companies.

My next career led me into the “human side of computers” as an IT consultant writing training materials, conducting corporate training and testing computer systems.

In 2008, I changed careers again and collaborated with my 91-year-old mother writing a book based on the letters that my mother sent home to her family while serving as a WAC stationed in Europe during WWII.  “Mollie’s War” published by McFarland Publishers in 2010 is the result of this endeavor.

Did an established writer mentor you in your early days?  If yes, how did the mentor help you?
The head librarian at the Pritzker Military Library in Chicago was most helpful in giving me guidance in terms of research and looking for publishers.  She showed me websites and places where I might get some ideas.  Because of the historical nature of the subject matter, she thought it was important to find a traditional publisher and to not self-publish.  A traditional publisher would vet the book and give credence to the accuracy of the information contained in it.   I was constantly researching and requesting any books that had to do with women and the military in WWII.

Because of censorship, my mother was not permitted to write about her work or where she was stationed—many letters indicated she was somewhere in England or somewhere in France.  She could only write about pleasant events, sightseeing, and boyfriends.  I had to investigate and put some history around the letters so that the book would put proper perspective to the events occurring around her at that time.

What genre do you most often write?
Non-fiction

Who are the authors you read most often?
Books about WWII, either non-fiction, such as: Erik Larson (In the Garden of the Beasts), or Laura Hillenbrand (Unbroken), or, historical fiction, such as: Sarah Blake (The Postmistress), Mary Ann Shaffer, and Annie Barrows (The Guernsey Literary and Potato Peel Pie Society).

Please list the writer’s organizations of which you are a member, and events you have attended recently,
• I am very active in the Midwest Writers Association and attend monthly meetings.
• I just attended the Chicago Tribune Printers Row Literary Fest in Chicago.
• I attended  the Military Writers Society of America’s annual convention in 2010.

Have you mentored an aspiring writer?
Would you mentor, if the opportunity arose?
I would gladly mentor

What advice would you give to all up-and-coming writers?
It is all about networking!

Are you involved in the ‘writing scene’ in your community/area?
Active

Please tell about your community activities.
I am involved in AAUW (American Association of University Women)

Please provide details of your upcoming book tour.
I share my mother’s story by speaking to various groups including  veterans groups, libraries, senior living facilities, women’s groups, men’s clubs and other organizations. I discuss the writing adventure from inspiration to publication.

Is this work a stand-alone or part of a series?
Stand-alone

Do you have any project(s) planned for the future?
Yes

Please provide some details of the project.
I plan to write a screenplay of my current book, Mollie’s War

What workshops do you plan to attend in the next 12 months?
I will be appearing at the Evanston Writers Workshop in August 2012.

How do you promote your book?
I do all of my publicity for my book.  Networking is the most important tool in spreading the word.  I am constantly talking about the book.   I find if I speak to one group, it leads to additional speaking engagements.  I also contact the print media in the Chicagoland area as well as nationally. I have had reviews and articles published about my mother and the book.  It’s always nice when someone comments to me that they saw the article in the newspaper, magazine or online.

My thanks to Cyndee for a great interview.  There are many of us who can relate to this – her mother’s story.  My father was a B-29 pilot in the Pacific in the later part of the war, flying 25 missions over Tokyo, so I found this story interesting.  I hope you will, too.